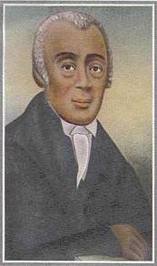 The African Methodist Episcopal Church was founded by Richard Allen, a 27-year-old freed slave who was a man of dignity, courage, insight and faith. He took a collection of ugly social conditions – discrimination, dehumanization, exploitation and religious persecution – and used them to ignite in blacks a determination to not only be first-class Christians, but first-class Americans as well.

After buying his freedom from human bondage in 1783, Allen became increasingly discontent with the religious bondage that was prevalent at St. George’s Methodist Episcopal Church in Philadelphia, Pa., where he and others of African descent were allowed to fellowship with whites. Fed up with arbitrary policies that restricted religious freedom, Allen organized the Free African Society on April 12, 1787, to abolish slavery and to help blacks help themselves.

This commitment to self-help was put to the test in November 1787, when Allen led a walkout of blacks from a Sunday worship service at St. George’s. The group of dissidents left after they were told they could not pray openly and freely, even though they were doing so in their own segregated gallery in the sanctuary. They quickly decided to establish their own church and, under Allen’s leadership, purchased an old blacksmith’s shop, which they moved to a lot at the corner of Sixth and Lombard streets in Philadelphia. They named their new place of worship Bethel A.M.E. Church. Mother Bethel, as it is also known, stands today as a historic site in the City of Brotherly Love. And Richard Allen continues to be revered for his determination to foster self-help, social recognition and humane treatment for all people. In 1816 he was elected the first bishop of the A.M.E. Church at the first General Conference of this new denomination.
In the tradition of Richard Allen, First Community A.M.E. is a church that is committed to reaching out to others. Like Allen, our Pastor firmly believes in uninhibited worship, self-help, Christian education, human equality and social responsibility.

First Community has a rich history of blessing God by attending to the needs of God’s people. The tradition began on June 15, 1874, when our Church was chartered in the home of Mrs. Susan Walker as Arnett Chapel. This legacy of service continues to this day, now as First Community A.M.E. Church.

Our church donates richly to the poor and needy through its bi-weekly Food Pantry Outreach program. Our church has a warm and friendly congregation of talented men and women who love to give. More than 25 per cent of our 250+ members are tithers. Their generosity over the years has enabled us to feed the hungry, clothe the naked, and house the homeless.