First Community A.M.E. Church
Our Church, first called Arnett Chapel, was chartered on June 15, 1874 in the home of Mrs S. Walker, 100 Lagrave. Charles A. Pinkney (a devoted Christian man) was the chief organizer of the congregation of several members. He organized Mission Church on Ottawa St. and rented a frame house. He was elected first steward and George Bently was trustee. Susan Johnson was the first church clerk. They rented space from the AME Zion Church where they held mission services once monthly and then twice monthly. Although they planned to purchase property on Lagrave, they bought a property called The Dutch School on Commerce Avenue and Goodrich St. On Sept. 12, 1882, fire destroyed everything and another site on Commerce Ave was purchased. Church members rented a blacksmith shop on Cherry St, holding services there until the church building was complete.

By 1888, more space was needed due to membership growth. The church bought a lot two blocks south on Commerce and built a small edifice that was occupied until 1916 when they bought the present site 500 James Ave. In 1919 the church name changed from Arnett Chapel to the Community Church. Services were then held over a hardware store at Henry and Wealthy Street. The cornerstone was laid in 1922 by Grand Master Charles. A. Cooke of the Grand Lodge of Michigan. He was assisted by WM J Edward Jones and his son Lawrence E. Jones Tyler of North Star Lodge.
Rev. Joseph Evans was the pastor when First Community was incorporated on Dec. 8, 1910. First Community Church opened its doors on March 23, 1923. Mr George Hinzelman, Master of Ceremonies, helped secure an advisory committee. In the spring of 1939, Rev. W H Jones, suggested that all members ban together to raise the $2,000 needed to pay the mortgage debts of the church. The Grand Rapids Community Chest agreed to pay the balance $18,000 if this goal was reached. Members raised $2,070 by January of  1940. 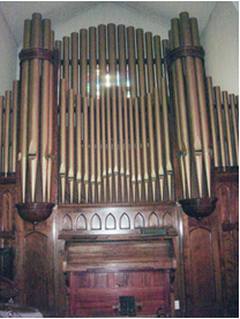 FCAME's original pipe organ still remains today as a historical fixture inside the church sanctuary.
The Rev. Lewis Pettiford and his congregation enlisted the aid of many community leaders to erect our church. The Missionary Society is named for Rev. Pettiford in recognition of his efforts. Bro. Samuel Pickney and many other officers served as the driving force. The Advisory committee that was charged with bringing out building project to fruition included Rev. John Willis, C.B. Kelsey, John W. Blodgett, CP Foote, Gilbert Daane, Jesse Gingrich and George Heinzelman who along with Herpolsheimer's Dept. Story gave $500 to the fund. Some Trustee names in 1923 included Rev. Pettiford, Joseph Ford, JB Jones, Drew Cobb, Dr. ES Browning, Rockwell Reynolds, Samuel Pinkney, Arthur Lay and Robert Goings. Ford was instrumental in attaining the $4,000 to pay for our pipe organ.

First Community has long been a church of community activism.  Dr. E.S. Browning organized a well baby free clinic held in the lower level of the church in the 1930's- early 1950's.  And in the 40's the church blocked of the streets to hold a community carnival. We believe in collaborating with other churches and organization for public good. The Rev. Lyman Parks, Rev. J.V. Williams of New Hope, Rev. W.M. Carter of Redeemer United Methodist and Rev. George Bottom at Smith Memorial Chapel facilitated the acquisition of a federal grant for one of the first hot lunch programs for Grand Rapids Public Schools students.

On Nov. 11, 1990, Nolan Groce Sr. was key in obtaining a subsidized government grant to build and operate the 24 unit Allen Manor Senior Citizens apartments. Rev. Robert Eckert was pastor at the time and Marilyn Eaddy was the first president of that board. Other outreach initiatives included an inside food pantry, Sarah Allen Family Neighborhood Center (in collaboration w/ Messiah Baptist Church), the library, spiritual youth jams, Interfaith and Interracial efforts with St. Luke AME Zion and First United Methodist Church. Mrs. Leona Spencer helped organize an after school tutoring program with computers in the 1990's.

First Community AME Church under with the leadership of Rev. David R. Jarrett Sr., made a major purchase of several homes in the neighborhood on James St. in an effort to help beautify and clean up the abandoned properties.  A beautifully landscaped and much needed parking lot was built to replace the empty lots where the homes were torn down. Rev. Dr. Nathan Dixon enhanced the usage of technology advances to the fullest and was instrumental in designing numerous logos for church marketing. Rev. Gerry Moore worked critically on stewardship and financial initiatives through a host of workshops, as well as revivals during his tenure.

On October 24, 2015, Bishop John Richard Bryant assigned Rev. Dr. Willie A. Gholston II to First Community. Under his leadership the church continues to grow numerically and spiritually as he continues to minister throughout greater Grand Rapids. As Pastor Gholston believes, “First Community is the intersection of faith and family, experiencing the favor of the Lord whereby living by the church motto, "Seeking ye first the kingdom of God and His righteousness and everything shall be added unto them." (Matthew 6:33).

The complete story of this First Community AME Church's rich history continues to be made and our church will live forever in the hearts and minds of the community we serve through the following: